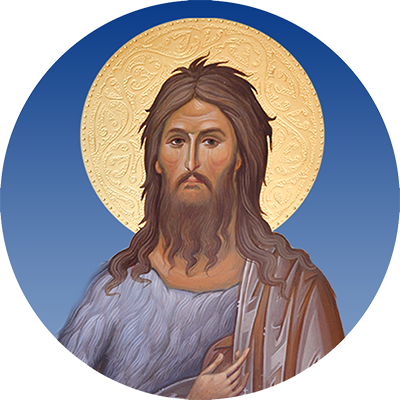 The glorious Prophet and Forerunner John the Baptist is also referred to as John the Forerunner because he was the forerunner of Christ. He was an ascetic and great prophet, who baptized Christ and became one of the most revered saints in the Orthodox Church. John is a cousin of Christ through his mother Elizabeth who was the daughter of Zoia. Zoia is the sister of Christ's grandmother. He was later beheaded by Herod in the first century to satisfy the request of Herod's stepdaughter, Salome, and wife Herodias. Because he baptized Christ, he is the patron saint of godparents. He is sometimes called the Angel of the Desert; because of this title, he is sometimes depicted with wings.

Isaiah 40:3-5 is commonly read as a prophecy of John. His father, Zacharias, was a priest of the course of Abia (1 Chr. 24:10), and his mother, Elizabeth, was of the daughters of Aaron (Luke 1:5). John held the priesthood of Aaron, giving him the authority to perform baptisms of God.

His birth took place six months before that of Jesus, and according to the Gospel account was expected by prophecy (Matt. 3:3; Isa. 40:3; Mal. 3:1) and foretold by an angel. Zacharias lost his power of speech because of his unbelief over the birth of his son, and had it restored on the occasion of John's circumcision (Luke 1:64).

As an adult John started to preach in public, and people from "every quarter" were attracted to his message. The essence of his preaching was the necessity of repentance and turning away from selfish pursuits. He denounced the Sadducees and Pharisees as a "generation of vipers," and warned them not to assume their heritage gave them special privilege (Luke 3:8). He warned tax collectors and soldiers against extortion and plunder. His doctrine and manner of life stirred interest, bringing people from all parts to see him on the banks of the Jordan River. There he baptized thousands unto repentance.

The fame of John reached the ears of Jesus in Nazareth (Matt. 3:5), and he came from Galilee to Jordan to be baptized by John, on the special ground that it became him to "fulfill all righteousness" (Matt. 3:15). John's special office ceased with the baptism of Jesus, who must now "increase" as the King come to his kingdom. He continued, however, for a while to bear testimony to the Messiahship of Jesus. He pointed him out to his disciples, saying, "Behold the Lamb of God." His public ministry was suddenly (after about six months probably) brought to a close by his being cast into prison by Herod, whom he had reproved for the sin of having taken to himself the wife of his brother Philip (Luke 3:19). He was shut up in the castle of Machaerus, a fortress on the southern extremity of Peraea, 9 miles east of the Dead Sea, and here he was beheaded at the instigation of Herodias; later tradition also implicates Salomé. His disciples, having consigned the headless body to the grave, went and told Jesus all that had occurred (Matt. 14:3-12). John's death occurred apparently just before the third Passover of Jesus' ministry.

Jesus himself testified regarding John that he was a "burning and a shining light" (John 5:35). John was the last of the Old Testament prophets, thus serving as a bridge figure between that period of revelation and Jesus. They also embrace a tradition that, following his death, John descended into Hell and there once more preached that Jesus the Messiah was coming.

The Orthodox Church remembers Saint John the Forerunner on six separate feast days, listed here in order of the church year which begins on September 1:

Miniature of the Finding of the head of St. John the Baptist (Menologion of Basil II, 10th c.).

The First Uncovering of the Head of St. John the Baptist took place in the fourth century at the time when Saint Constantine the Great and his mother, St. Helen, began restoring the holy places of Jerusalem.

The Second Finding of the Precious Head of St. John the Baptist of took place on on February 18, 452, at Emesa.

His relics are kept in several places including: